Humanity and technology come to the IT-TRANS stage

Let’s introduce you to the wise words of our IT-TRANS 2022 keynote speaker Gerd Leonhard as he takes to the stage in Karlsruhe with his unique view on humanity and technology.

The world is changing, and public transport finds itself looking to the future in an ever-changing society.

For the eighth edition of the most important event dedicated to I.T. and digitalisation in public transport (Karlsruhe, 10-12 May) the conversations taking place at IT-TRANS will determine what this means for people and our movement.

As digitalisation continues to alter the ways in which we live, interact and move, public transport must always be a people-centric sector.

Gerd Leonhard will bring his unique conversation to the stage in Karlsruhe as our brilliant 2022 keynote speaker.

As a futurist, humanist, author, speaker and filmmaker, Gerd is the CEO of “The Futures Agency” and specialises in the debate between humanity and technology.

Looking beyond conventional futurism, Gerd zeroes in on what the future holds for humanity and how we will create the future we want…remixing futurism with humanism, algorithms with androrithms, science with imagination and business with art. It’s time to talk tech.

Meet Gerd Leonhard as we look to the future 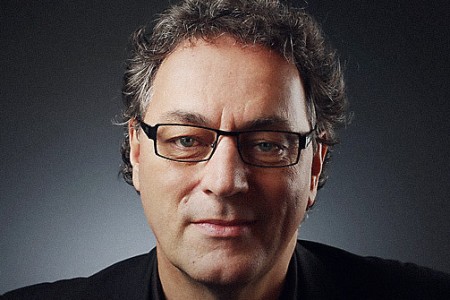 The world has lived through great change in the past two years and the digital revolution transforming urban mobility has remained at full speed.

Since IT-TRANS began in 2008, public transport has lived through more than a decade’s worth of innovation and advancement.

We know that our sector is driven by technology and the next steps will show how important innovative developments will be to building a truly people-centric public transport.

It’s important to hear from those voices inspiring change and inviting conversation, and as one of the leading futurists worldwide, having presented at hundreds of leading conferences and events and worked with the likes of Microsoft, NBC, Visa, Google, the European Commission, Audi and IBM, Gerd is the man for this moment.

Originally from Bonn, Germany and now living in Zurich, Switzerland, Gerd studied at the University of Bonn and the Berklee College of Music, first establishing a career as a professional musician, arranger and composer.

He set up an early internet business in music, which provided first-hand insights into technology disruption and inspired his first book, co-authored with Dave Kusek, “The Future of Music” in 2005.

Influenced by classic futurists such as Alvin Toffler, in 2016, he published “Technology vs. Humanity”, a manifesto for digital rights and an investigation into the many areas of life currently impacted by technology disruption without regulation or policy.

He has since published five books and performed in front of a combined audience of more than two and a half million people in over 50 countries.

Gerd is a familiar face within the international media, having featured in interviews and articles from the Guardian, Harvard Business Review, Wired UK, BBC, CNN and more. He is also a Forbes column contributor, a fellow of the Royal Society of the Arts in London, and a Visiting Professor at the Fundacao Dom Cabral in Brazil.

With a passion for exploring the relationship between people and technology, you won’t want to miss seeing Gerd Leonhard live in Karlsruhe.

Follow Gerd’s activities before he takes to the IT-TRANS stage!

Join Gerd's Keynote speech at the Opening Session of the Conference. Join him and many other leading figures from operators, authorities and industry who will be sharing their experiences on the latest digitalisation trends in public transport which also includes panel discussions, workshops, technical visits and more. Get your conference ticket today!

News delivered right to your mailbox!